As a keen mountain biker I couldn’t let the introduction of a bicycle suspension system that shares my name go by unnoticed. I’m very attracted to the mechanical aspects of mountain biking, king of all the cogs, wheels and gizmos on a bike has to be the suspension system. Even since the very early, very simple days of bike suspension, a shiny and pricey fork on the front of a bike has been sure to draw admiring glances. People still stand over a bike and perform cursory tests which involve smashing the front wheel into the ground, no doubt giving accurate impressions of fork travel, damping setup and system response.

There was a time when purist mountain bikers argued that the arms and legs provide all the suspension a cyclist would ever need. Essentially these purists were stating that additional suspension was pointless and constituted unnecessary weight. A quick glance at modern riding styles put this philosophy into question.  The arms and legs of a late 80’s cross-country cyclist were acting as shock absorbers, trying to isolate the body of the cyclist from forces transmitted as the bike’s wheels crossed uneven terrain. Unfortunately, these arms and legs were also required to pedal, steer, brake, change gear and wave to passing ramblers. It’s no wonder that designers started adding dedicated systems to absorb shock.

Modern suspension systems can be staggeringly complex. A good quality suspension fork will allow you to finely tune the forks damping and spring rate for the most appropriate feel. Some of  the most expensive suspension forks even have seperate damping circuits for different frequency bumps, you can have a very firm fork on relatively placid terrain which opens up and becomes very active when the going gets rough.

Cannondale’s new Simon system (which made its debut at this year’s interbike trade fair) makes existing systems look decidedly last century. All the fork’s damping duties are handled by a single motor controlled orifice damper. Mechanically the Simon system is incredibly simple. The rate of fork compression or extension is limited by the oil flow through a single hole. A computer controlled stepper motor adjusts the size of the orifice and hences controls the flow of oil. The Simon system is claimed to act so precisely and swiftly that the set-up possibilities are effectively endless (Cannondale claim 10,000 configurations).

As an engineer, avid mountain biker and techno nerd I can’t help but be excited by the potential of this technology. With an accelerometer and array of position sensors the computer knows, how much the fork has compressed  and what forces are being transmitted at any instant. In order to achieve the various settings and damping configurations the motor is constantly working as the fork moves through its travel. In the video below (from Bikerumor) Cannondale demo some of the possibilities and discuss the technology.

Cannondale state that the Simon fork can go from fully closed (locked) to fully open (active) in 6-8 milliseconds. This got me thinking, just how quick is a response time of 6 ms? Can the suspension open up mid-bump or has said obstacle sent the rider skyward by then? Some existing ‘inertially locked’ systems (Fox’s terralogic or Specialized’s brain) attempt to keep suspension rigid until needed by using a damping circuit activated by a moving mass. However, some users claim that the above systems can’t respond quick enough to absord the first few obstacles in the terrain.

Has Cannondale solved the problem? Could the Simon fork recognise a bump and open up the damping system before you’ve even finished passing over it? I considered attaching an accelerometer to my bike in an attemp to determine the average bump duration. I then decided that this was perhaps an excessive response to an idle pondering. I have tried to figure out how long a bump might last using a simpler method; how would a circle pass over a square? This depends on the size of  the circle and  square. The larger the relative size of the circle the more it smooths out the sheer edges of the square and the smoother the transition (one of the reasons why the larger 29″ wheel size is catching on). More specifically, how would a 26″ inch circle pass over a 10 cm sided square when travelling at 15 m/s (33.75 mph)? In this simplified case, the rolling circle (wheel) has to pass over the straight edged square (bump or kerb) in order to continue. I reasoned that if the wheel is in contact with the square for around 6 ms then the Simon fork wouldn’t have a chance to react in time. For simplicities sake I have assumed that the circle does not slow down during its journey. Being an engineer, I plotted the results on a colourful graph to enjoy. 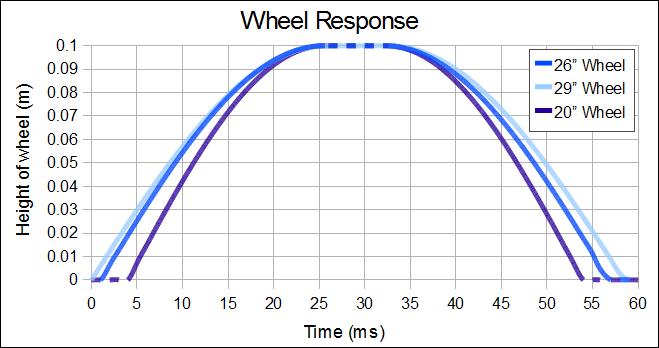 You can see from the graph above that the standard 26″ wheel takes about 25 ms to conquer the rise on to the bump and about 56 ms to clear it completely. If Cannondale’s numbers are accurate, the Simon will have had ample time to react to the bump and absorb the majority of the shock transmitted. I realise this is a gross over-simplification. Cannondale admit that the deformation of the tyres delay the transmission of shock to the system and can delay its activation. However, the delay is only a few milliseconds. Also, I’ve made it purposefully hard, in this ‘simulation’ the bump is sheer edged, the system is rigid and the circle is travelling at a speed most mountain bikers would rarely experience, all factors which will reduce the travel times seen in the plot above.

So there you have it! A suspension system which can potentially read the trail so rapidly that it prepares ideal settings on the fly, but there must be downsides? The nature of the system means that in order to be effective, it must be constantly monitoring your riding and making adjustments. This is going to be energy hungry, other blogs report a battery life of anywhere from 8 to 2 hours. This technology probably isn’t going to be imminently released so there’s still time to sort these problems out, if Cannondale ever read this blog, can I suggest something equivalent to a faraday torch? A magnet in the inner leg, some coiled copper in the outer and as the suspension moves an induced current recharges the battery. I’d be happy to take a pair off your hands to try out some ideas, just get in touch.

If that equally shameless and hopeless attempt at obtaining free space-age suspension doesn’t work I suppose I’ll have to get saving like everyone else.