Haile Gebrselassie from Ethiopia is one of the greatest marathon runners of all time. He set the current world record of 2 hours 3 minutes and 59 seconds at the 2008 Berlin Marathon. Recently he announced his retirement, after dropping out of the 2010 New York Marathon with an injury. He later reversed his decision following a letter from Brendan Foster.

“My announcement in New York was my first reaction after a disappointing race. When my knee is better again I will start focusing on my next race.”

His decision reversal could mean we will see him run on the streets of London at the 2012 Olympic Games!

As a sports engineer I have to ask the following questions;

1) Could Haile or anybody else run the marathon in under 2 hours at the 2012 Olympics?

2) Is it physically possible to run a marathon under 2 hours?

In this blog article I am going to explore these questions using historic performance statistics.

Humans often look at seemingly unreachable targets and describe them as barriers. A few examples of this are the sound barrier first broken in manned flight by Chuck Yeager in 1947, the 10 second barrier in the 100 metres first broken by Jim Hines in the 1968 Mexico Olympics, and the 4 minute mile barrier broken by Roger Bannister in 1954. There was a time when the general consensus was that these barriers were impossible to break.

Could the 2 hour marathon be similar to these barriers, which are now simply considered to be milestones?

My gut instinct suggests no, however as a scientist I am compelled to look at the historical evidence.

Figure 1: The top marathon and mean of the top 25 marathon performance times for males

The 2 hours barrier is shown on the graph as a red line. The barrier is currently 3 minutes 59 seconds away from Haile Gebrselassie’s record. Using data from 1948 onwards an exponential decay curve was plotted through the mean of the top 25 results. Regression analysis was used to predict a limit based on the top 25 data. This limit is plotted on the graph with a purple dashed line and is approximately 2 hours 4 minutes and 43 seconds.

Haile Gebrselassie current world record is still someway off the predicted human limit. However, the predicted limit is still a further 1 minute 48 seconds away from the 2 hour barrier!

The historical evidence suggests that it is unlikely that we will break the two hour barrier. However this is not the first time that a limit to marathon performance has become apparent. We can once again look at historical performance figures to see when this has happened before and suggest methods for possibly breaking the 2 hour marathon barrier.

What caused the large increases in marathon performance?

What caused the massive increase in performance from 1948 onwards? One possible reason could be the influx of East African athletes on to the scene. Figure 2 shows the number of runners in the top 25 representing African countries. 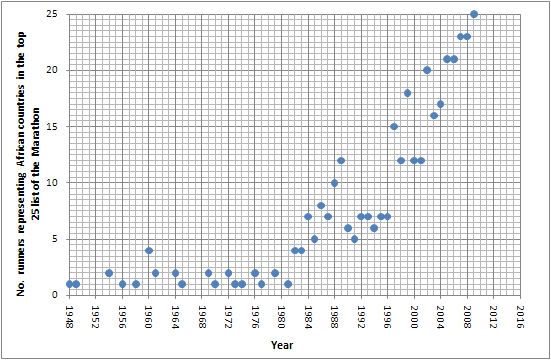 Figure 2:  The number of runners representing African countries in the top 25 list for marathon running

Surprisingly there were very few African runners in the top 25 in the early 1950s (neglecting runners of African origin representing other countries), and it seems that the massive drop in the fastest marathon time was down to a British man Jim Peters. The massive drop in performance time from 1948 to 1970 could be due to improvements in sports science and technology, such as training methods, better nutritional knowledge, better planned tracks and possibly drugs.

African runners did not make a significant mark on the top 25 list until the 1980s. What is interesting here is that the marathon times seem to reach a plateau or exponential limit around the late 1970s. The influx of African runners around the late 1970s and early 1980s, caused another much smaller step change in performance, which then leads on to another exponential decay curve up until the present day.

What will it take to break the 2 hour barrier?

Performance enhancing drugs are banned. Therefore, we are unlikely to see an increase in the performance limit as a result of drugs. What about better training methods or more efficient running shoes? The historical evidence suggests that improvements as a result of technology have reached a limit. It is unlikely that any significant improvements will be made in these areas, without the invention of some revolutionary new technology or training methodology.

The only viable way, if it is at all possible to break the 2 hour marathon limit, is through the expansion of the global population who are provided the opportunity to compete. There are lesser developed countries, islands and tribes which have never been given the chance to compete at the Olympic Games. For example, Tribes such as the Tarahumara, indigenous to Mexico and renowned for their long distance running prowess. If given the opportunity to compete on the world stage Tarahumara athletes could potentially break the 2 hour barrier.

This is comparable to the 1970s, when competitors from East African countries started influencing marathon performance. The marathon looked as though it had peaked and performances were levelling off. However, the influx of East African runners has increased marathon performances up until the present day. We could actually be seeing something similar to what is occurring in sprinting, where performance has increased rapidly over the last few years. Could this be down to Jamaican dominance? Only time will inevitably tell whether true global competition will improve performance further still, in the marathon and all other athletic events.

The historical evidence suggests that Haile Gebrselassie, or any other runner from the current crop, are unlikely to break the 2 hour barrier at the 2012 Olympics. Breaking the 2 hour barrier is likely to require an intervention such as a radically new training technique, new technology or an influx of new athletes in to the current talent pool. The timescale for breaking this limit is therefore unknown, and possibly infinite.

Saying this, don’t rule Haile out just yet, anything is possible and predicting the future based on statistics alone is only ever going to be a “best guess”. All the best to Haile Gebrselassie and his training team, I and many other would love to see you break the 2 hour barrier at at the London 2012 Olympics!