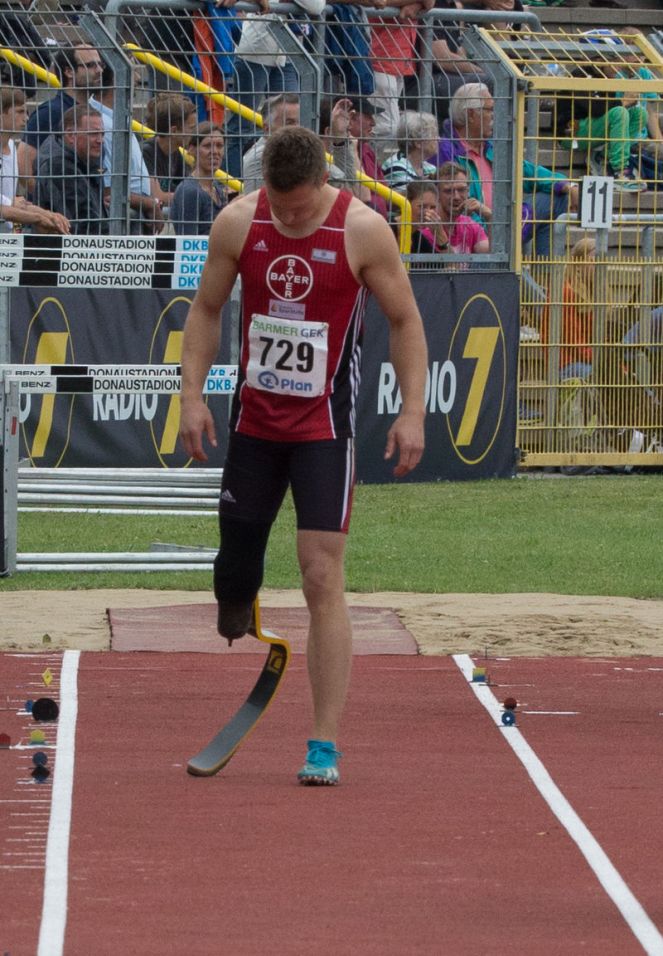 Markus Rehm is a really good long jumper, despite the prosthetic limb on his right leg.  Or perhaps because of it.  He competed at London 2012 in the paralympics (in the F42/44 category) with a winning distance of 7.53 m. He now holds the IPC world record with 8.40 m, the 3rd longest distance in any long jump event.

There are now calls for Markus to compete at the Rio Olympics just as Oscar Pistorius did in 2012.  The same questions arise as they did with Pistorius: are prosthetics an advantage or disadvantage?  Should he be allowed to run with ‘able bodied’ runners? Is Rehm an en-able bodied runner?

If you watch Rehm’s run up, you can see that his gait is asymmetrical, oscillating side to side perhaps a little more than a jumper without a prosthetic.  He takes off on his right leg – the one with the prosthetic – with a beautiful clean trajectory that appears to rely on the springiness of his carbon-fibre foot.  If it has no advantage, one might ask, “why doesn’t he take off with his left leg instead?” (although the answer could be that the right is his ‘natural’ take-off leg).

What are the differences between the prosthetic limb and a human leg?

Should the IAAF allow Rehm to run at the Olympics in Rio?

Rehm has admitted that the philosophical argument is a tough one: when he wasn’t winning his prosthesis didn’t seem to be an issue but now that he’s into his training, optimising his technique and improving rapidly, it appears that people are worried that he might win.

And this is where Rehm is between a rock and a hard place.  If he loses, that’s fine.  If he wins, then people will complain that his leg gives him an unfair advantage.  The ‘worse-case scenario’ probably, is if he wins by a huge amount.  What if he was to double the world record?  A crazy scenario maybe, but  there would be a huge outcry that it was an anomaly, that the leg is doing all the work, that it is tantamount to technical doping.  So how much would Markus be allowed to win by before we complain?  100 cm? 10 cm? 1 cm?

The only thing that research seems to agree on is that a prosthetic limb is different to a human leg.  The physiology may be different (or not) but the mechanics certainly are.  Given that sport is arbitrary, with arbitrary rules made up to ensure fairness, all we can try to do is make sure that athletes that compete together are not different.

Markus Rehm is a fantastic athlete with a prosthetic limb and seems a really nice bloke.  My heart wants him to compete in the Rio Olympics.  Whether his prosthesis gives him an advantage or a disadvantage is not the point, though.  He is just different and belongs in a different race.  For this reason, I think the IAAF are unlikely to want him to compete in Rio.  Whether Rehm takes this to the court of arbitration, as Pistorious did, is another matter