The modern pole vault (i.e. that which we see in the Olympics) is a competition based on vertical height. Competitors use a pole (between 3 to 5 metres long) to clear a bar set at a specified height. The competitor that is able to clear the greatest height is the winner.

Historically, pole vaulting was used to cover horizontal distances (across canals, ditches or spans of water) rather than gaining vertical height. This historical version of pole vaulting has also evolved into a competitive sport. 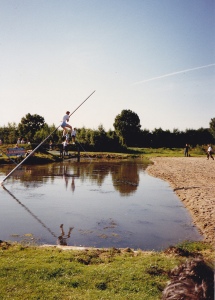 Pole vaulting has ended up as a fiendishly technical event. The modern vaulting pole is a very complex piece of equipment. Constructed from layered fibre glass, it is designed to bend and store energy very efficiently. Poles are built with different stiffness and weight limits so an athlete can tune them to their style and size.

Over time the construction of the vaulting pole has changed significantly and it’s a big factor in the performance in the event.

Let’s have a look at the history of the pole vault data to see how things have changed.

For a description of the sections of the datasheet and how to interpret them please see our original article on the 100 metre sprint.

Visit our datasheets by clicking on the images below.

It is clear from the men’s datasheet that the USA have, historically, absolutely dominated the event. Of all the data we have, over 50% of records are for an American athlete. In the early part of the 20th century their domination was supreme — around 80% of the top athletes were from the U.S.A.

In the women’s data one thing is immediately very clear. The International Association of Athletics Federations only recognised the event in 1994 — astonishingly recent. We weren’t able to collect reliable data before 1991 so our data-set only progresses from this date.

In this short time, the women’s event has been dominated by three nations — Germany, the U.S.A and Russia.

Sergey Bubka is the stand-out competitor from Pole Vaulting history, breaking the world record 17 times over the course of his career. Despite his domination of the sport, he won only a single Olympic gold. His success was attributed to his great strength and gymnastic ability. The same has been said of his female equivalent Yelena Isinbayeva — the current world record holder. Unfortunately she was unable to compete in Rio because of the ban on Russian athletes.

Over the course of the events we’ve investigated we’ve come to expect almost perpetual progression. We’ve seen some stalling in female events due to an era of performance enhancing drugs but generally average performances have increased over time.

The Pole Vault is no exception, in both the men’s and women’s data a general increase in vault height can be seen throughout the data. However, there are a number of points in the event’s history where progression wasn’t guaranteed.

This change is accompanied by a change in technology and technique. The table below shows the evolution of technology in the event. In 1942 the world record was set at 4.77 metres in the United States. It wouldn’t be broken again for 15 years. Of course, this was during World War 2, and average performances can be seen to take a dip in this period (competitive sport is not a priority in times of great conflict). However, even after the end of the War over a decade would pass before the record was pushed on by only 1 cm.

If we look at the technological advances that have taken place in the Pole Vault (in the table below). The first advance, aluminium poles, directly corresponds with the date of that world record progression (1957).

Pole Vault progression has been reliant on technological advance. In the lifetime of the event, the technique and technology has completely changed.

In the early days of the event, relatively rigid poles were used and athletes landed in sand pits. 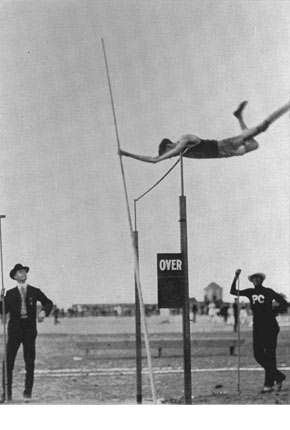 In the Pole Vault, an athlete’s kinetic energy is transferred into height during the vaulting phase. The athlete is also able to add height through good technique.

When wooden and steel poles were used, the proportion of the vaulter’s kinetic energy which could be transferred to height was limited. The video below shows the arced path the pole vaulter must take to clear the bar.

Modern technology revolutionised the event. Flexible poles are able to store the kinetic energy of the runner. After the vaulter plants the pole in the ground their speed reduces considerably as the pole bends. Afterwards the bent pole gives the energy back to the athlete by lifting them vertically. This change in dynamics and technique allowed the vaulter to achieve much greater heights.

Finally, the introduction of crash mats meant that athletes could fall from increased heights without injury.

If you look at the men’s datasheet, the technological revolution is visible in the mid 1960s as the increase in performance rises more steeply. However, something else becomes apparent from the mid 1990s — atrophy. Since 1994 the World Record has only been broken once (as an indoor record, it isn’t included in this data-set). We are approaching a limit. The height of the jump is dependent on the speed of the runner. Technology has intervened on a number of occasions with lighter (to allow athletes to run faster) and more flexible (to allow athletes to store their energy in the pole) materials.

Without further technological innovation we might have to accept that progression will stall. Unlike in running events, where one hundredth of a second can be taken off a record at a time, in the pole vault, progression is measured in centimetres. It may be some time until an increase in running speed is translated into a large enough increase in height.

The rules for the Pole Vault are relatively lax, perhaps an innovation can be developed that will allow athletes to run faster or for more energy to be stored in the pole. This may be necessary so that jump heights can continue to increase.

N.B. Please note that the data we have included in this case is for outdoor performances only.